My mother sent me photos of a gorgeous Mother's Day bento my stepfather got for her (and for himself too of course!) yesterday. It's from Hikagejaya, a restaurant in Hayama, a town near Kamakura in Kanagawa prefecture (where Yokohama, where my mom lives, is too). I've written about Hikagejaya previously; it's one of my favorite restaurants in Japan, and their bentos are just wonderful. A little taste of haute cuisine in a bento box. As part of my ongoing (irregular) series reporting on storebought bentos in Japan and elsewhere, here are a couple of gorgeous bentos bought and consumed in the historic town of Kamakura. I'm busy getting ready for the photo shoot for the bento cookbook, which starts next week, so I don't have a lot of time for long posts at the moment. So I thought I'd do a brief write up of this bento I had for lunch today. It's a good example of a higher-end takeout bento, of the kind you might buy in the food hall of a department store, at specialized stores or stalls in the bigger train stations, and so on. One of the questions asked in the comments to my first Japan trip report was what kind of healthy 'fast-food' options there were. In that vein, I thought I'd talk about something that you can see for yourself, in a way. You might have heard already how totally awesome Japan's convenience stores, called conbini or konbini, are. They are like the 24 hour delis and bodegas that you see all around a big city like New York in a sense, but go several steps further in terms of customer service. Competition is fierce between the major conbini chains like Lawson, Family Mart, and 7-11, and competition between the conbinis and the fast food restaurants for the quick-meal market is quite serious too.

Japan's 7-11s are not quite the same as the ones in the U.S. to say the least. One of the services they offer is takeaway or home delivery of pre-ordered meals, including bentos. They have a dedicated web site for this service, called 7meal (セブン・ミール) (in Japanese only.) In case you don't follow my other food blog, Just Hungry, I am in Japan for the next 3 months. I'll be reporting on non-bento stuff over there, but of course I'll be posting about bento related things here!

I just got here yesterday, so I don't have much to report yet, but here are some photos of takeout bentos available locally, in the suburban area of Yokohama (a major port city near Tokyo) where my mother and stepfather live. 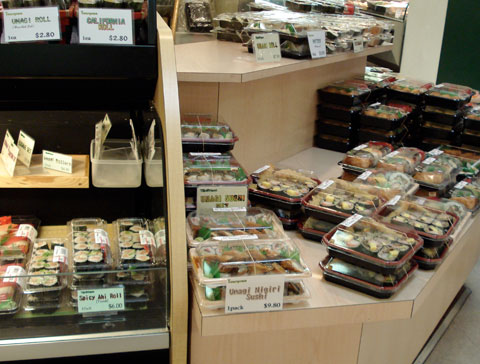 I'm back home! I've posted more in-depth articles about my food-oriented experiences on Oahu over on Just Hungry (Part 1, Part 2) but I thought I'd talk briefly about some bento-related things I found there on Just Bento. I only had 6 days there, at least 3 of which I spent mostly beach-hopping, so I couldn't cover much, but hopefully this gives a general overview.