The best bento box for you really depends on your needs 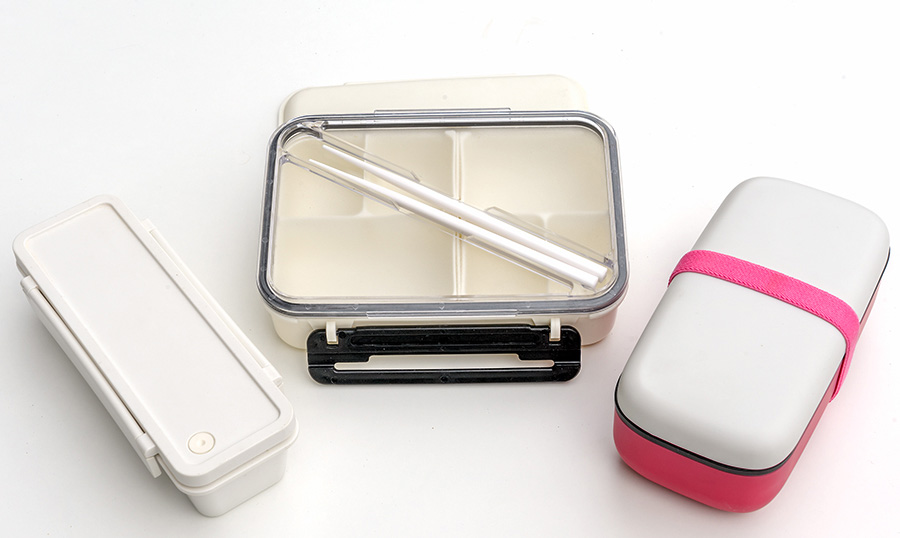 As you may know, I was kind of away from this site for a while. Although I was still writing about food here and there, and about various topics related to Japan and Japanese culture, I have been rather absent from the world of bentos. Well OK, I did write another bento cookbook! But still.

In my absence, the concept of the bento box has become a lot more popular. It is no longer difficult to find a suitable box and other equipment, as it used to be when I started this site back in 2007. People are packing all kinds of bento boxes, or lunchboxes if you prefer, as the myriad of results for searching for "bento box" on Google or Pinterest and more show. People who have little interest in Japanese food, or anything Japanese, are showing interest in bento lunches. This is a great thing; when I started this site, it was to to spread the concept of the bento lunch, not just Japanese recipes for bentos. Just looking through the recipes on this site (which are all 100% bento-friendly) will reveal that there are plenty of not so Japanese recipes as well as Japanese ones, and both Just Bento Cookbooks have lots of recipes of both types.

In case it's not clear, the tl;dr version is: A bento lunch is simply a portable meal in a portable container. A homemade bento lunch is usually packed in a re-usable container, and ideally contains food that 1) tastes great (and safe!) several hours after it's made, 2) meets your or your family's dietary needs, and 3) looks really appetizing.

While the general concept of the bento lunch has indeed spread far and wide, I still feel that a lot of people are not quite getting it. A case in point is a recent video review posted by the venerable American institution, Cook's Illustrated. With all due respect, I think they are rather missing the point.

There is no such thing as the one perfect bento box that suits everyone.

The problem with product reviews of any kind that choose the "best" of something is that they do not take into account that everyone has different priorities and needs. The above video review is no different. The one they chose, a large MonBento model, is perfectly nice. MonBento makes great bento boxes (here's my review of one), but is the one they selected for everyone? Absolutely not. For one thing it's huge, with a a whopping 1700ml capacity. It is actually marketed as a picnic box for 2 or more people. It's going to take up a ton of space in a backpack, and how would you pack that thing in a briefcase or a business-type tote bag? And how would a small child with a small backpack carry that back and forth to school?

Before going out to buy a bento box, think over your reasons and priorities wanting to get into bento lunches, as well as what you want to eat in them.

That's a long headline, but it really does cover the things everyone should think over before rushing out to buy a bento box. For instance:

It seems to me that the only kind of lunch that the Cook's Illustrated testers were considering for their reviews were the 'fluffy with lots of air' type, which is why they went for the big box. But if that's not the type of lunch you want to pack, all that space and bulk taken up by a big box is just unnecessary.

Most people need at least 2 different types of bento boxes, plus a couple of side boxes.

Unless you only eat one type of bento lunch, chances are you will need at least 2 different types of main containers for your bentos:

One compact Japanese style box, for densely packed meals. As I've stated many times on these pages, Japanese bentos are really packed pretty tightly and hold a lot of food.

The photos here are from the Just Bento Cookbook 2; they show a pretty hearty meal arranged on a flat plate, and the same meal packed into a single-layer type Japanese bento box and a two-tier type box. The single layer box has a capacity of around 850ml, and the two tier one a total of around 750 ml. The plate is a standard dinner plate, about 11 inches (28cm) in diameter. 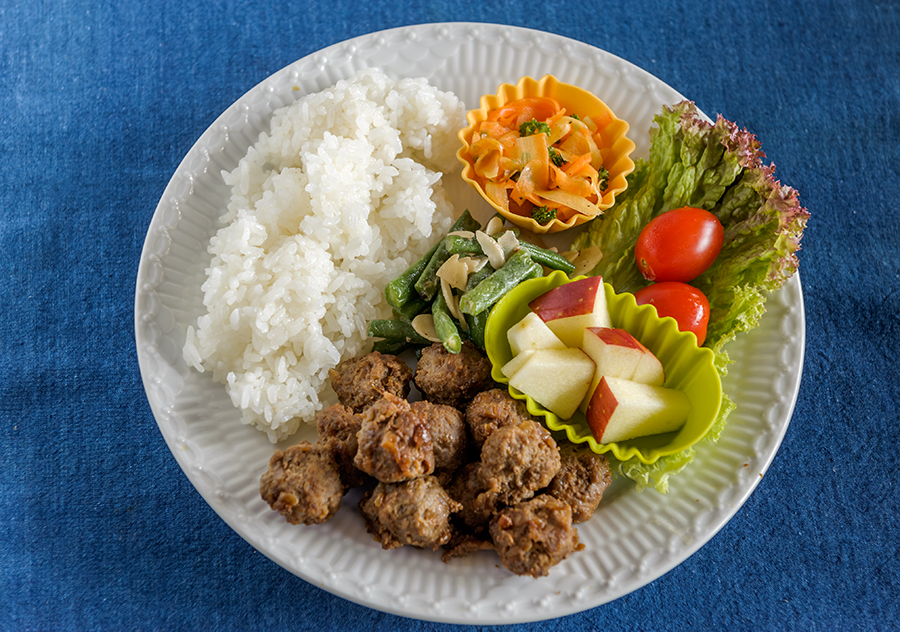 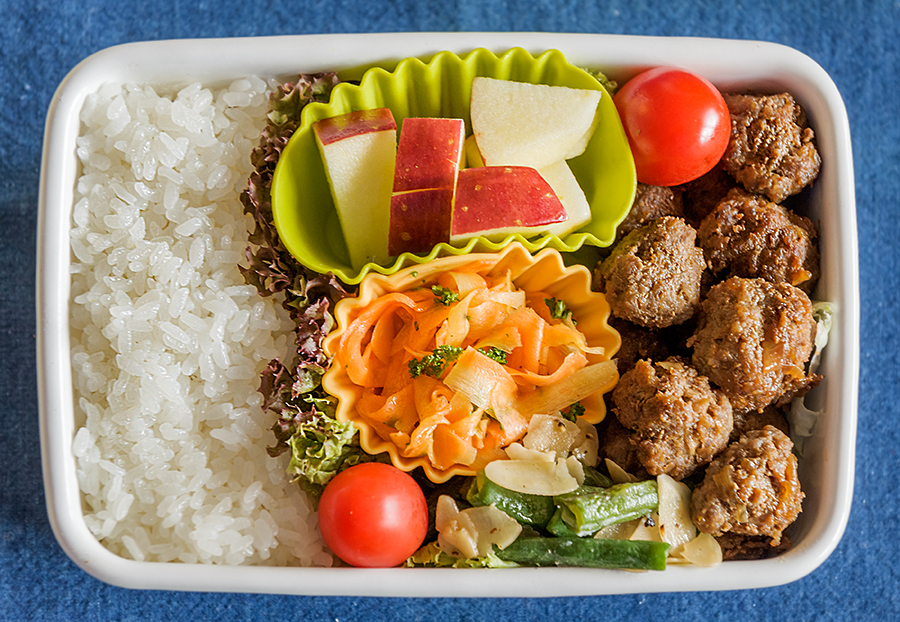 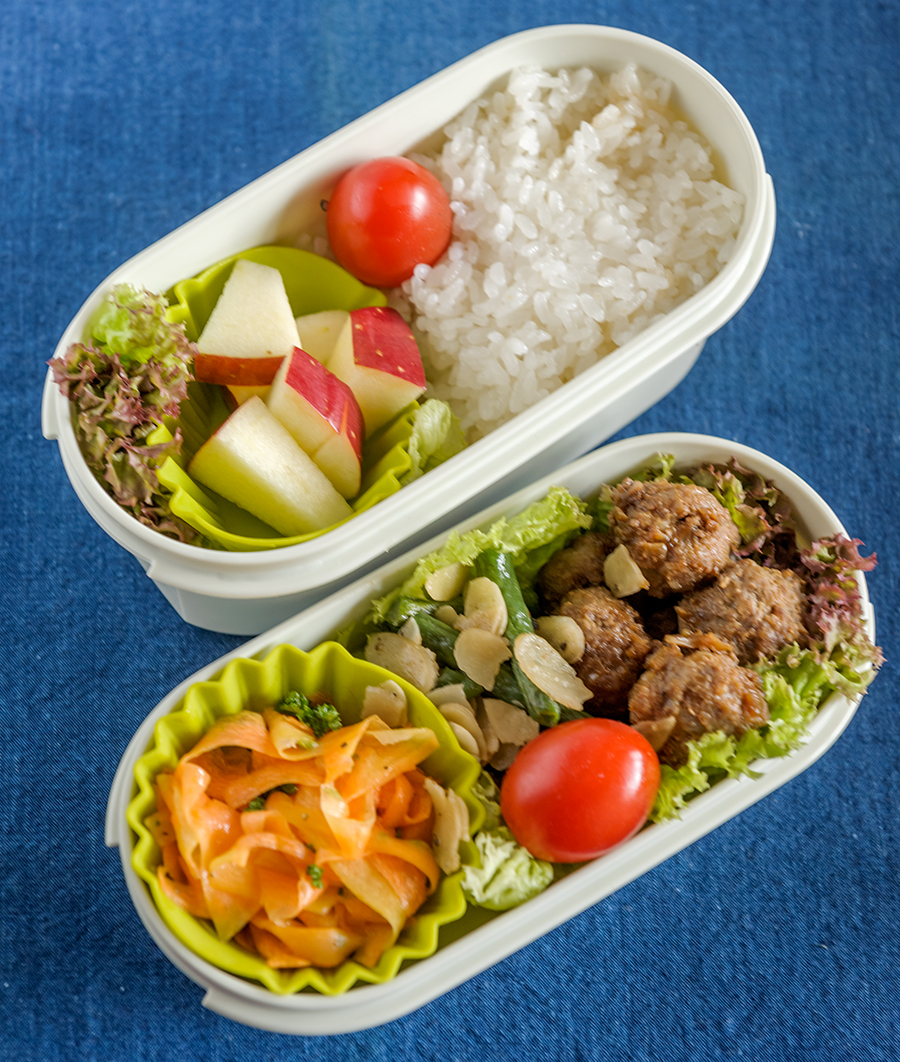 One larger box, for salads or sandwiches and other meals that need a lot of air around them. Both of these boxes have a capacity of about 900 to 1000 ml; the one on the right is a 2-tier box, which each tier holding about 500 ml. Still a lot smaller than the large MonBento box though! Personally I don't really like big boxes because of the bulk, so I prefer to pack salads in multiple boxes - one large one for the fluffy greens, and a leakproof side box or two for say, a bean mix marinated in dressing and/or shredded cheese and ham. 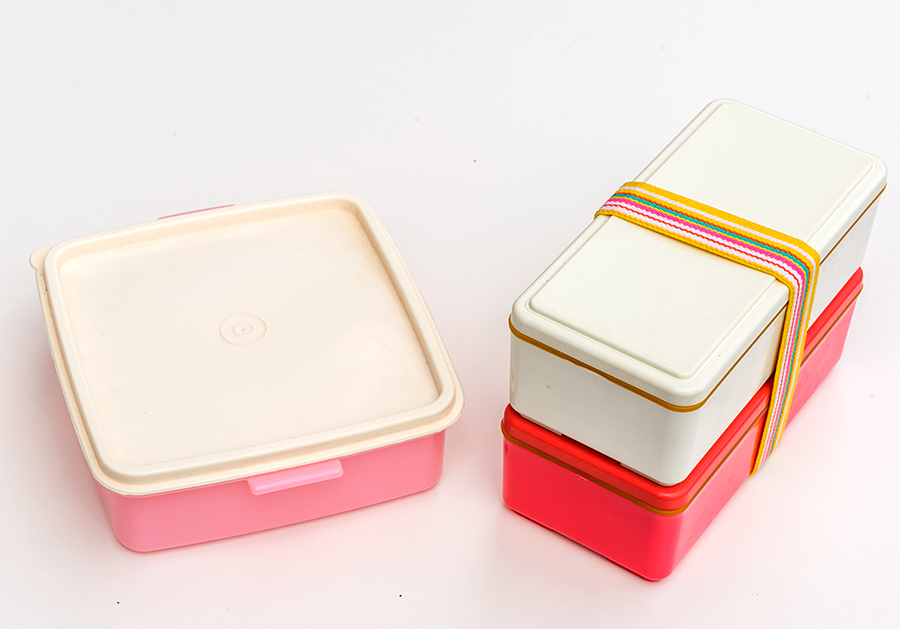 In addition to the two basic box types, you may always want to have:

Some small side boxes for fruit, dessert and so on that you want to keep separate from the rest of the food, or to use for the salad packing method described above. 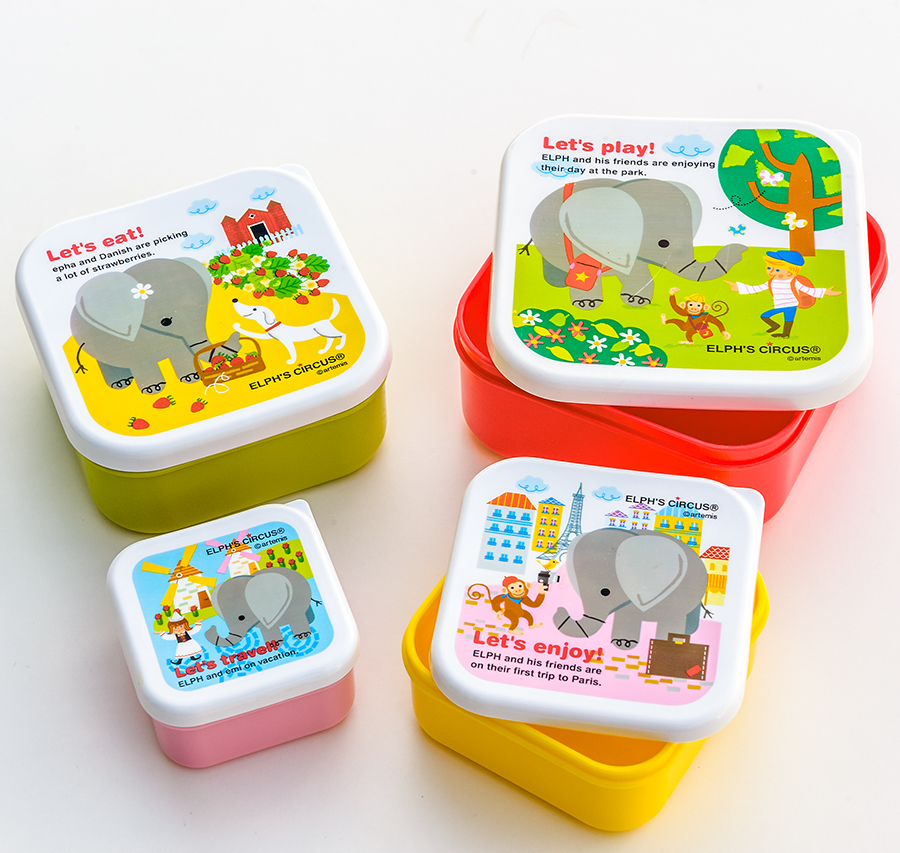 That should cover the needs of most people. If you want to add a third type of box a thermal type might be useful, especially for hot soup lunches, which are great in the winter. Here's another bento from the Just Bento Cookbook 2, with a hot soup in the thermal container and sides in a tiny yet cute children's bento box that I use as a side box. 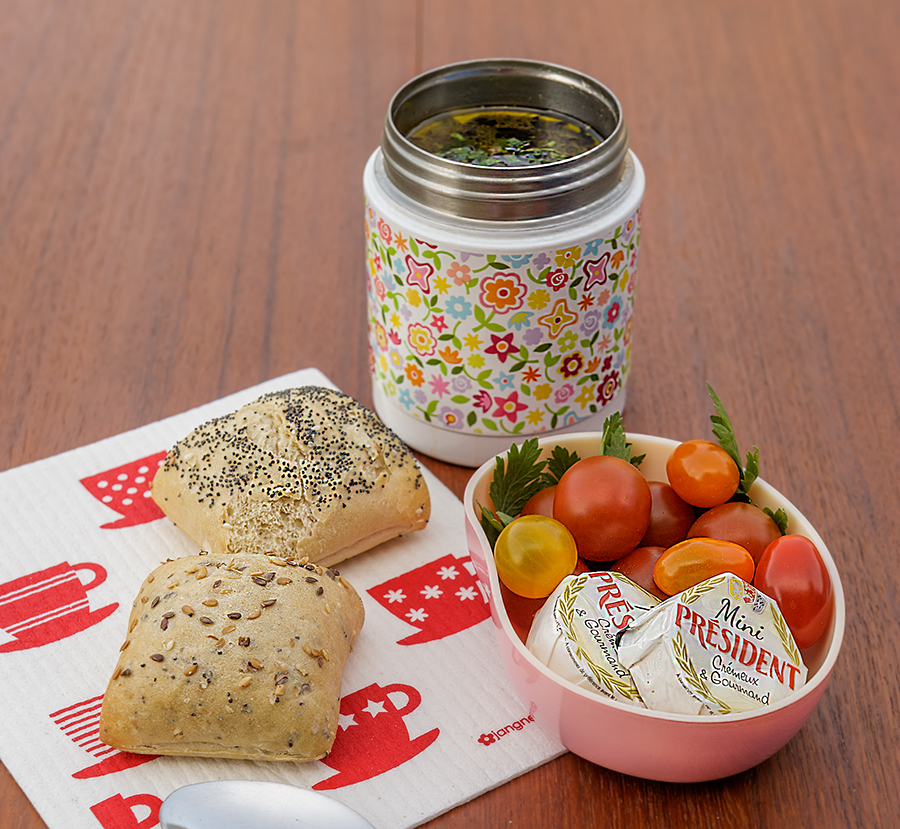 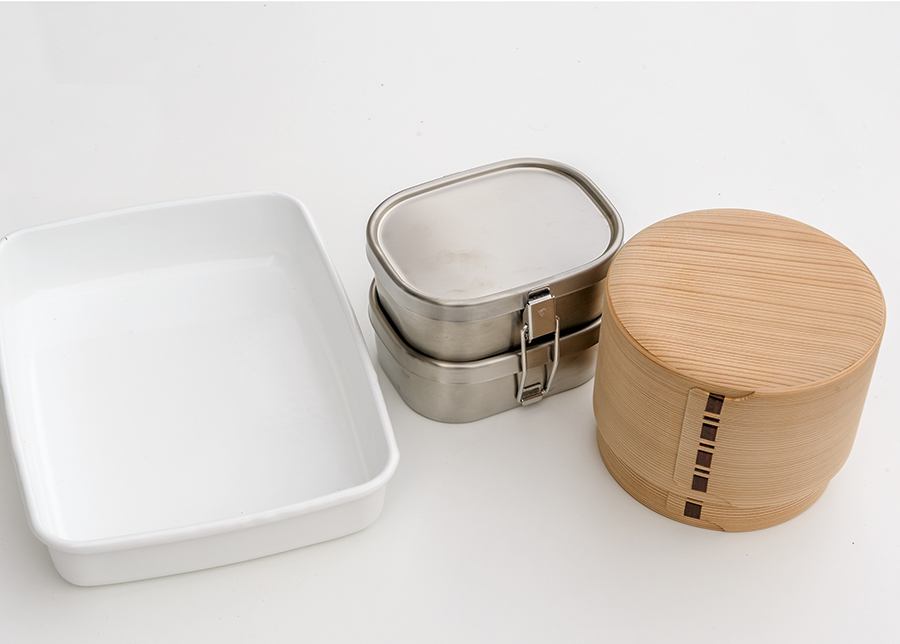 Most bento boxes are made of some kind of plastic, but some are made of other materials. My comparison chart of different types of materials used for bento boxes should come in handy. If eliminating or reducing plastics is a high priority for you, consider how much you want to eliminate. If you want 100% plastic-free boxes, they are going to leak if you put liquid things in them.

If you want to keep your bento containers totally plastic-free, the solution is to not put liquid things in them, and carry them the right way up. It's a bit of hassle to be sure, and you need to consider if you can deal with that. If you can allow yourself a reduced amount of plastic, a box with a plastic or silicone sealing gasket around the lid, a couple of inner silicone or plastic containers with lids or sealing side boxes for liquid elements like dressing may be an acceptable compromise.

Type:
basics
Filed under:
bento boxes
‹ Upcoming: Bento box and accessory reviews up How to use a single-onigiri bento box ›