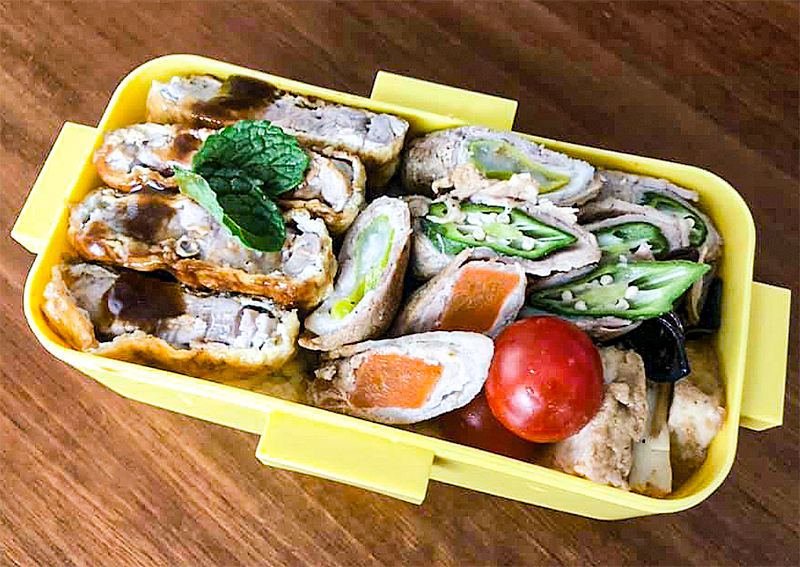 My friend Junko lives and works in Tokyo. She has a full time busy job, and although her son is off at school, she also have a very busy life outside of work too, with lots of interesting hobbies and a really busy social life. I don't know anyone else who has as many friends as she does!

She also makes bentos to take to work, and posts them regularly on her social media. I love her bento pics because they aren't style for the camera at all - she just snaps them with her phone - but they look so appetizing and have lots of good ideas. Above all, they are real bentos made and eaten by a busy lady. I managed to convince her to let me post some of her bento pics here. The explanations are my own, based on what she wrote about them.

What characterizes her bentos in general is that they are fairly low-carb (not low-carb), depending on whether she's trying to lose a little weight at the time or not. They are also loaded with vegetables. Last but not least, she says they are made very quickly. See if you can pick up some ideas from her bentos for your own! 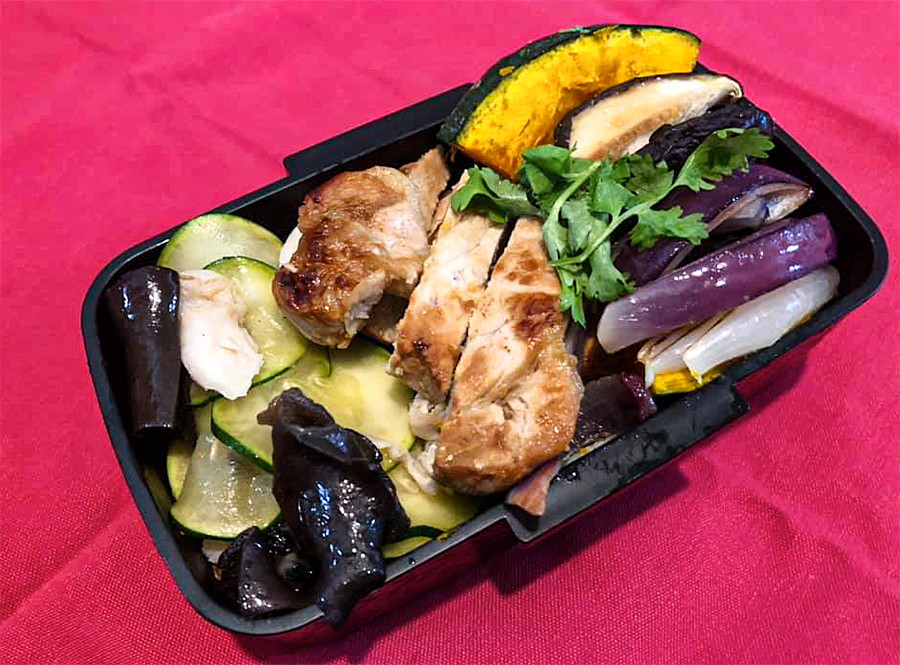 This one was posted in the summer, although it would work in other seasons too. It features pork filet that was seasoned with preserved lemons, then pan-fried. There's also a mixed salad or side dish (called aemono, or sunomono if it's made with a vinegar sauce) with zucchini and wood ear mushrooms and a little chicken breast; plus grilled mixed vegetables - shiitake mushrooms, red onions, and kabocha squash. There is rice underneath everything, but you could leave it out if you are doing very low-carb. 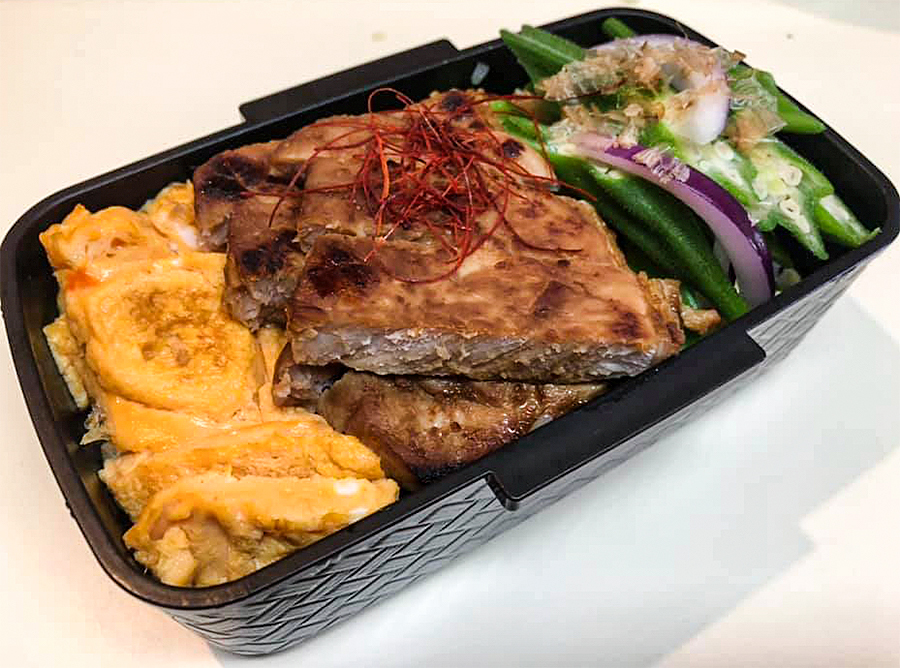 This is another summertime bento that would work in all seasons. The main is miso marinated pork - she says it's great for bentos, and I totally agree. There's also tamagoyaki (a Japanese omelette) and boiled okra with a little katsuobushi and soy sauce. Rice is tucked underneath. Pork is a great source of B vitamins (B6 and B12) and is said to help combat summertime fatigue. 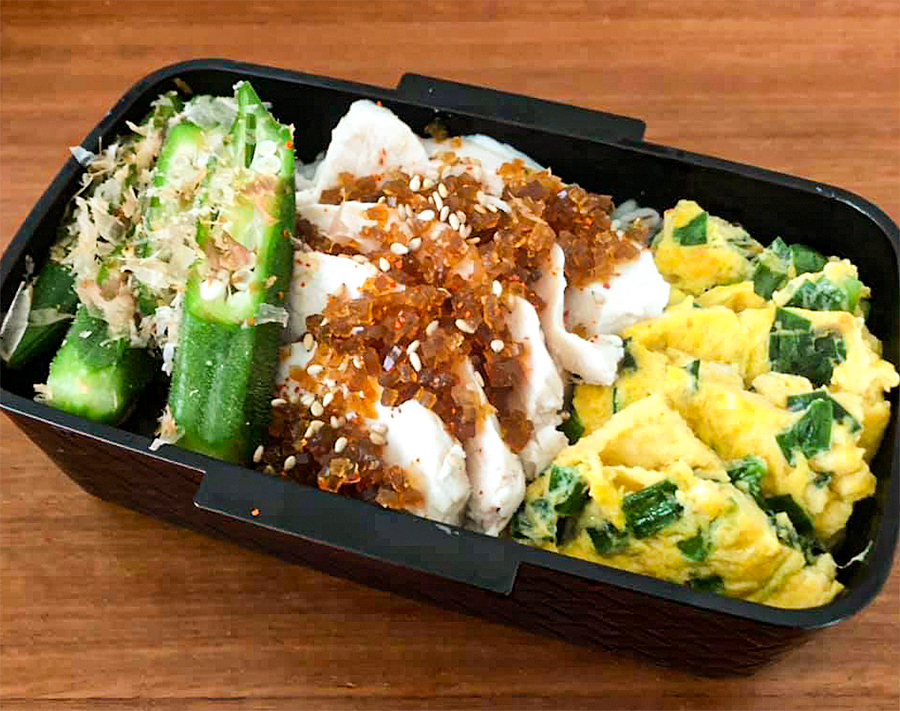 Torihamu or Chicken "Ham" is a great bento staple, which can be made in advance and used over a couple of days for bentos if refrigerated, or even longer if frozen. This bento features torihamu with some ponzu sauce flavored furikake, which sounds amazing; boiled okra with katsuobushi; and tamagoyaki with some nira (Chinese chives). She used rice with mochi barley, which is similar to pearl barley, underneath for added fiber.

You may er, blanch at her frequent use of boiled okra, but it's really a great source of fiber, and many Japanese people like the sliminess - myself included! You can substitute something else though, such as green beans. 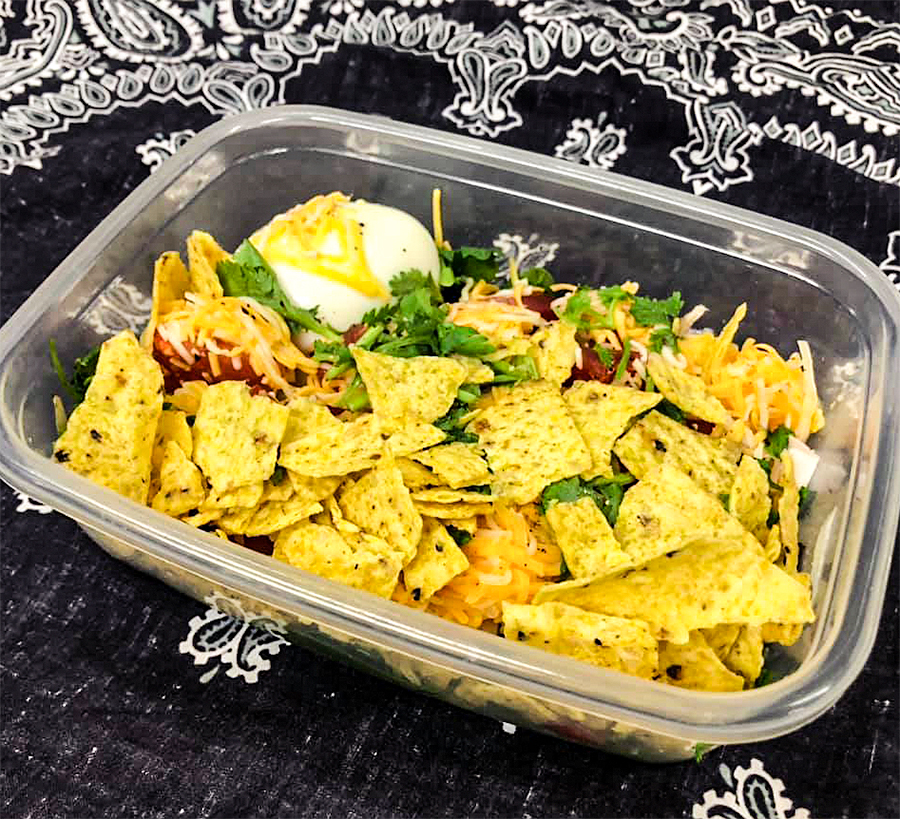 Nope, Japanese people certainly do not stick to just rice based bentos. This salad bento has torihamu again, mesclun (baby salad leaves), sliced onion, tomatoes, kidney beans, cheese, a soft boiled egg, and fresh coriander. The tortilla chips are carried separately and mixed in before eating. (Note: in Japan eggs are generally safe when soft-boiled like this, but you may want to hard-boil the egg to be on the safe side.)

Here's how the salad looks when it's mixed up. 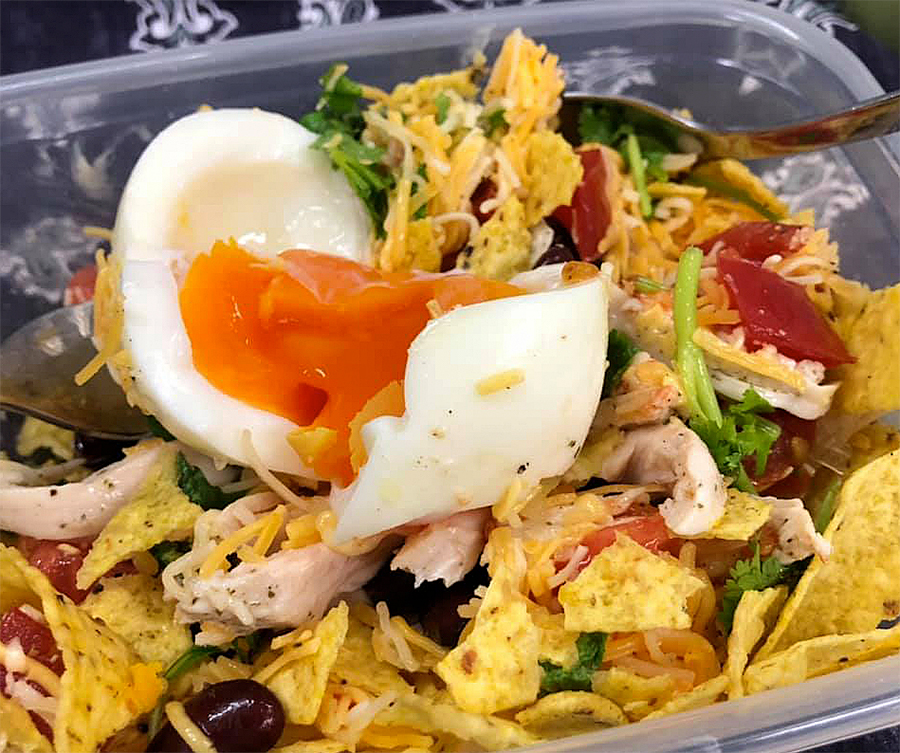 This is a variation on the same idea. It has mesclun,kidney beans, chickpeas and green peas; cucumber, tomato, apple, goji berries, a little fried onion (available at Asian/Chinese groceries, or if you're in the US you can crumble up French's Crispy Fried Onions), pine nuts, cheese, smoked chicken, plus tortilla chips carried separately. Wow! 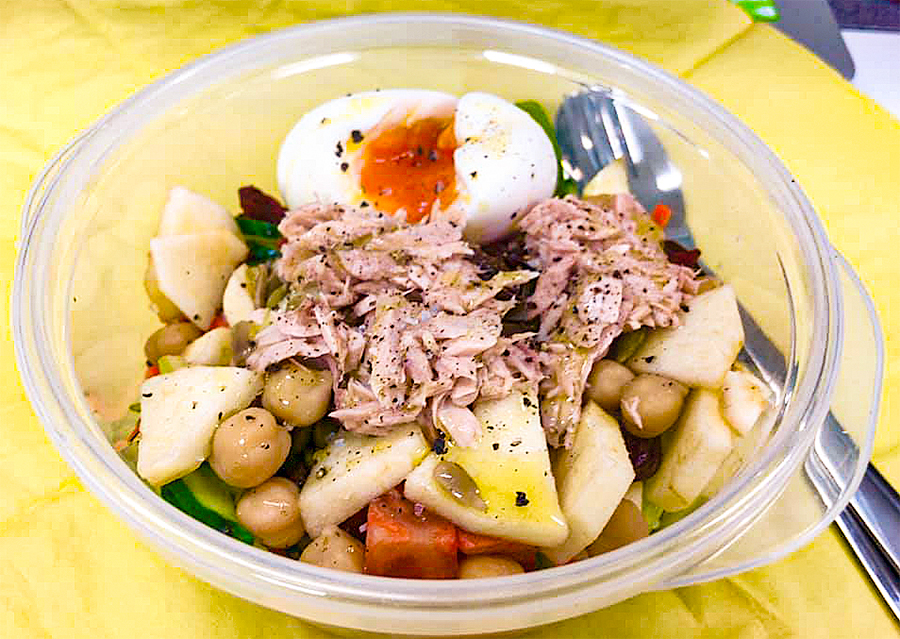 Last but not least, this bento features a version of tonkatsu that has no breading and doesn't require deep frying. The meat (pork filet in this case) is packed into aburaage, fried tofu skins that are used for inarizushi, but you don't need to blanch the tofu skins in this case. You can also pack in some chopped vegetables if you like, or use ground meat. Form the meat and aburaage into little closed bags, and pan fry them until crisp. Junko-san has added sauce (she mixed "sauce" with some Japanese mustard, which is basically pure mustard powder mixed with water) to the tonkatsu. The bento also has various vegetable -meat rolls - vegetables wrapped in very thinly sliced meat. There's okra, leeks, and carrots, plus some simmer-stir-fried pork and atsuage (thick fried tofu). I think this is from one of her no/low-carb periods, but it looks very filling without rice!

That's all for now! If you'd like to see more of Junko's bentos, let me know and I'll stalk her for more photos. ^_^